A few months ago I had the dubious distinction, I mean, pleasure, of playing Sonny from Sonny and Cher at our women's retreat. My friend Becky and I were singing I Got You, Babe. I searched for suitable "Sonny" attire, downloaded the karaoke version of the song from iTunes, learned the lyrics, and still couldn't wrap my head around the fact that I had actually agreed to do this.  I was freaking out for the entire weekend leading up to our performance during the Saturday Night Variety Show. (You should really check out our retreat...it's like none other!) Seriously, it was stealing my joy. I was losing my mojo.

Fifteen minutes before showtime, I was in the bathroom practicing in the mirror and I figured it was time to put Sonny's moustache on and BAM! With that little furry thing glued to my upper lip, my inner Sonny was unleashed. This nasally voice came out of nowhere and I was Sonny! I stopped trying to actually sing well, and just let the nasal tones fly. It was hilarious! I had a blast, "my" Cher had a blast, and the audience had a blast. 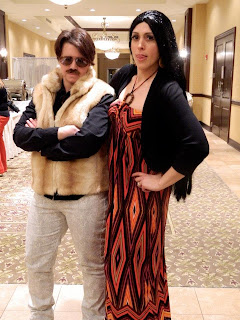 I learned two things that weekend: I am more of a ham than I had realized. And, when we pray for God to use us as He sees fit, we may find ourselves with a stick-on moustache and tinted sunglasses having the time of our lives.

Debbie Giese
I'm a wife, mom, and grandma with a passion to reach the world around me, to bring hope to those who need it. Following that call leads to some interesting adventures. I love to encourage others to follow hard after God, whatever that looks like for them. Come hang out with me on the blog...perfection and pretense not required. We'll figure this thing out together. If you are looking for a speaker, check out my bio/topics page.

Promote Your Page Too

Topics I Write About